It’s hard to believe its been a full year since I last had to do a serious fiberglass grinding session!  I had almost forgot what a joy it is! No, not really, it’s not fun at all! haha.  Yesterday I decided that the weather was OK enough to do some work on the aft deck again.  To check out the last time I worked on this you can read this post which also included several hours of grinding.

I’d like to point out that if I had the chance to do this part over I would have laid new fiberglass instead of trying to re-use the old skin.  I didn’t realize it until too late but the amount of grinding needed to achieve a good bevel really obliterated the old skin that we used and it probably would have been easier and quicker to start from scratch in this case.

Anyhow, yesterday was a beautiful day and it was really nice to be out on the farm working.

I also got to try out my new 3M 6000 series rugged comfort quick latch respirator which I really like so far.   Jamestown distributors accidentally shipped me the filter cartridges a while back and when I contacted them to let them know of the mistake they said I could keep them.  I decided to buy the corresponding face mask and I’m really happy with it all. 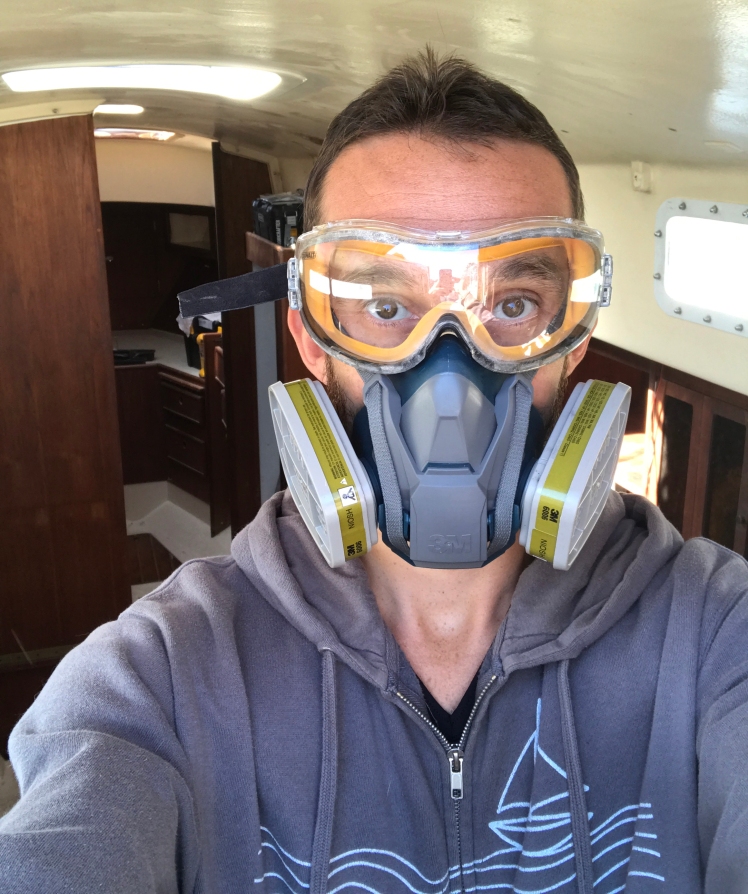 The grinding was painful and slow, as always.  It’s one of those jobs you just have to power through.  There were many points where I was like “well maybe thats enough for today, I can do the other half next week…” haha.  That just doesn’t cut it and so as much as it was painful I kept going and got the job done. Once the ridges were all ground down and all the bevels re-ground it was time to sand.  Sanding was not nearly as bad and being able to hook the sander up to a small shop vac makes all the world of a difference when it comes to dust control!

After several hours the grinding and sanding was complete and the whole area was cleaned up with Xylol.  The wind had started to pick up so the fiberglassing was a real pain and I could not take any pictures.  I had to move fast mixing up batch after batch of epoxy and cutting fiberglass strips in the right configuration to be laid down.  Fiberglass was blowing everywhere and there were even some times when a strip or two blew overboard and had to be chased down!  Anyhow, the image on the left is everything all ground out and cleaned up and the image on the right is the new layer of fiberglass laid down.  We will need two or so more layers and then we can be done with this mess!

4 thoughts on “Back to the Grind…”