When my wife and I purchased hull # 214, our 1980 MKII A37, we knew that we were in for a major refit. She had been sitting on the hard for about 10 years with little maintenance. One of the items on our list was to completely re-do the plumbing for the head. While we had the head torn apart, we decided to completely re-do everything. In the following I will describe the process we went through to replace the plumbing, holding tank, and three seacocks. We made some of our own additions like a discharge pump, and Y valves for coastal regulations as well.
One of the aesthetic items that we recognized right off was the state of the main bulkhead in the head. Not only was it stained but this is the smallest space on the boat and we wanted to brighten it up a bit. We decided to paint it with a white alkyd enamel paint and instal a large acrylic mirror.
To prepare the bulkhead we removed all the hangers, wires, and miscellaneous things attached to it and sanded it down. After sanding we applied a primer – its debatable whether this is needed but being on a boat we are already in a moist environment and the head is probably the most humid and wet place so we wanted to make 100% sure of a good bond between the paint and wood. We then painted it with 4 coats of alkyd enamel paint.
We also removed all of the cabinetry, the sink, hoses, and toilet. 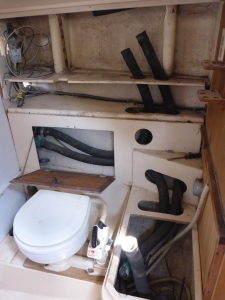 Our boat was not set up with a Y valve to meet coastal regulations for the United States which requires that the Y be able to lock in place when in the “discharge to holding tank” position. There were also two horizontal runs of hose about 4 feet each that you can see behind the head in the picture above. This allows the sewage to sit stagnant, eventually allowing smells to seep through the hose.
We did a tremendous amount of research as to the best set up for the new system. I consulted books such as “This Old Boat” by Don Casey, “The Boatowner’s Mechanical and Electrical Manual” by Nigel Calder, Practical Sailor, numerous online sources, and my father who is a full time cruiser. After over a month of continuous research we decided there were a few things we wanted: a holding tank, a way to discharge straight overboard, a Y valve that locks in place, a deck pump out, and a “direct out” pump out. The in-line ball valves on the thru hulls were in a bad state so we also decided to replace all of the thru hulls with flanged seacocks.
Here is the rough diagram of what we decided on:

I really like how the tanks are set up on the A37 so that they float in the bilge and do not have any points to chafe on. Unfortunately our holding tank, located in the center of the saloon floor was completely corroded and in a really bad shape, as was the bilge!

We decided to scrap the tank and as much as I admire the design I stopped short of building a new fiberglass tank myself. The supply costs were almost as much as a new polyethylene tank. After scouring the internet for all of the available tanks in their hundreds of different sizes we finally found a perfect fit for the A37! The Trionic #SP2020 is a 20 gallon tank that measures 12” X 16” X 24” and is made of 3/8” virgin polyethylene which is an excellent holding tank material. The tank its self is $182 but they have a “Super Premium” option that is $332. While we don’t have much in the way of extra funds we decided this was a place we wanted to splurge so we ordered the “Super Premium” option which comes with the outlet and inlet 90 degree fittings, an inspection port, a vent fitting and a vacuum relief valve all pre installed on the top of the tank. We have heard from another A37 owner, S/V Wind Song, that they have the same holding tank installed on their 1973 yawl.
After cleaning up the bilge we painted it with an epoxy barrier coat and bedded the new tank in neoprene for chafe protection. I purchased an entire roll of 1 1/2 inch Trident marine sanitation hose from Jamestown Distributors at a considerable discount compared to other retailers. The roll was $300 and free shipping which works out to $6/ft, a pretty good deal as it turns out we needed almost the entire roll. 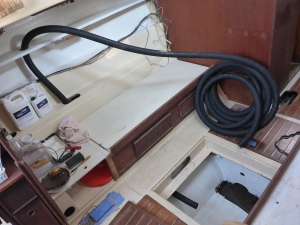 After securing the tank in place we ran the hoses from the head to the tank and back. We installed a Y valve at the tank on the pump out end with one hose leading to the deck pump out on the port deck and the other hose leading back to the head where we mounted a discharge pump so we can empty the holding tank on our own. While we had everything taken apart, I re-fiberglassed the chainplate knees, fiberglassed the bottom of the shelving, and painted everything with an alkyd enamel paint. We then measured all of the hose lengths and started making our diagram shown above a reality. The Y-valve we decided on is the Jabsco diverter y-valve which has interchangeable fittings and completely disassembles for maintenance. The vented loop is made by Forespar and is on the discharge hose, the pump is made by Sealand and is a diaphragm pump which is self priming and will not burn up from running dry. Here is a mid way progress shot, you can see the discharge pump and Y valve clearly:

Once we had the nuts and bolts of the system in place it was time to install the new seacocks. We chose Forespar Marelon flanged seacocks due to their excellent design and build quality, impossibility of corrosion, and no need for electrical bonding. We removed the old in-line ball valves and thru hulls, pried away the rotten wood bases, ground down all the fiberglass, and increased the two 1 1/4” holes to 1 1/2” to match our new plumbing. We then made new bases of a much larger diameter, mounted silicon bronze carriage bolts and epoxied the bases in place. After all three bases were epoxied in place we painted the entire area in an epoxy barrier coat and installed the new Marelon Seacocks with the silicon bronze hardware. 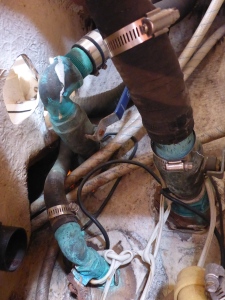 The old in-line ball valves showed signs on severe corrosion, two were seized, and all three failed when we applied a little pressure with a pipe wrench.

After removing the old ball valves we carefully ground down the fiberglass in preparation for the new seacock bases.

We drew diagrams of each seacock flange and measured out the bases, which way the handles needed to face, and their interaction with one another. After we constructed the actual bases, we dry fit everything and tested the positions again. 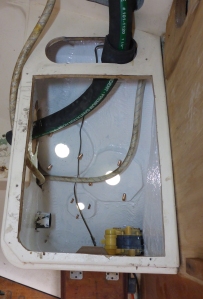 Here you can see the bases with the silicon bronze bolts sticking out epoxied in place and painted with an epoxy barrier coat.

All three seacocks in place showing how we decided to orient their handles so that they are completely accessible and will not interfere with one another.

To finish up this massive project we added chafe protection around each of the hoses and painted everything before re-installing. Here is a picture of the finished project before we installed the new head. The Y-valve to switch from the holding tank to direct overboard is just behind the cabinet door on the right. The Sealand discharge pump is behind the lower cabinet door, every part of the system is easily accessible for maintenance and repair.

2 thoughts on “Head Refit, Article for the A37IOA”